How To Examine Your Cervix

When you do a cervical self exam with a speculum, flashlight and mirror, you can observe your own cervix and the natural changes it has during your cycle and through your life. Self exams let you track changes, secretions, your menstrual cycle, and helps you know when you’re fertile and when you’re pregnant. You can recognize what stage of fertility you're in by viewing your mucus, fertile mucus is a sign of ovulation. With a speculum it is no longer necessary to guess when you’re fertile. You'll see the os of your cervical canal, and your vaginal walls. You’ll be able to identify yeast imbalance, which is common. 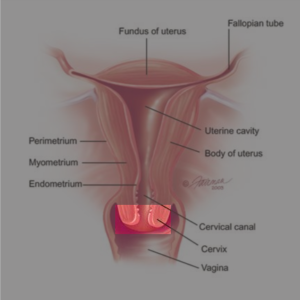 The cervix is the opening to your uterus where menstrual blood, babies, and sperm pass through.  It is also the opening through which abortions are performed.  Spermicide and barrier methods of birth control, like the diaphragm, female condom, and cervical cap, work by covering the cervix and preventing sperm from entering the uterus.  Hormonal methods of birth control, including oral contraceptives and Depo Provera, affect the mucus around the cervix and make the opening more resistant to sperm.

Knowing how to do a cervical self exam and understanding what your cervix looks like through your cycle is one of the most powerful tools a woman can have.

Take a few minutes to get familiar with the speculum by opening and closing it so you know how to lock it open and unlock it to open and close the bills. When you’re ready to do your exam, sit comfortably; leaning back with your legs open, knees up, on a bed or couch with some kind of support behind you.

Most women’s cervix is a knob-like pink structure about the size of a small plum. The cervix of women who have never been pregnant may be a little smaller and dark pink, and women who have had children may have a slightly larger cervix of a medium pink and the os will look different. As we get older, the cervix becomes a lighter shade of pink. A healthy cervix is usually smooth and shiny. In the middle is the os opening and may be so small you can hardly see it, however in most women, it is slightly open. The os usually opens up during ovulation. In some women, especially women who have had several children, the os may be more open and look more like a line than a circle. The presentation below shows you some normal variations of healthy cervixes. 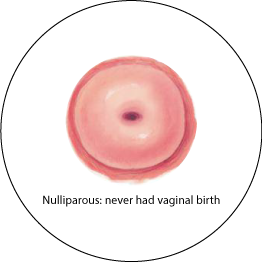 Cervical os is round

A woman who never had a vaginal birth.

Cervix of a female who's never given birth through the vaginal canal. (Nulliparous)

Cervix of a female who has given birth through the vaginal canal.

Cervix of a female who has given birth through the vaginal canal. (Parous) 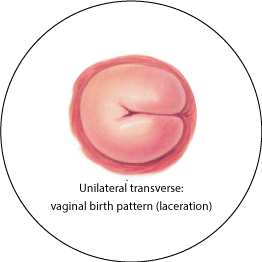 A variation of a completely normal cervix after vaginal birth. (Unilateral transverse)

A variation of a completely normal cervix after vaginal birth. (Unilateral transverse) 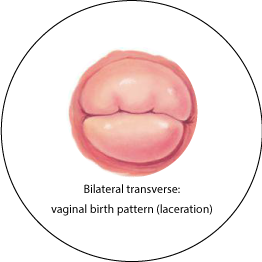 A variation of a completely normal cervix after birth through the vaginal canal.

A variation of a completely normal cervix after birth through the vaginal canal. 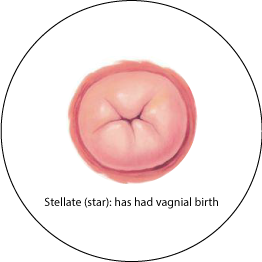 A variation of a completely normal cervix after birth through the vaginal canal. (Stellate) 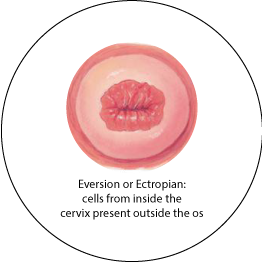 Squamo-columnar junction: the rim where lining of the cervical canal meets the face of the cervix. This forms a visible red circle around the os. (see details below this presentation).

Squamo-columnar junction: the rim where lining of the cervical canal meets the face of the cervix. This forms a visible red circle around the os. (see details below this presentation).

Cysts : considered normal cervical anatomy and form when normal tissue on the cervix grows over mucus-producing tissue, traps the fluid or tissue and a cyst forms.

What you see here are cysts which are benign and common. Cysts are considered normal cervical anatomy and form when normal tissue on the cervix grows over mucus-producing tissue, traps the fluid or tissue and a cyst forms.

All of the terms you see in the presentation (Nabothian, Nulliparous, Parous etc.) are doctor-speak and do not indicate anything other than appearance. If you have a rough or irritated area on your cervix, doctors sometimes call it an “erosion” (they may also label the squamo-columnar junction an erosion). The irritation may be caused by a tampon rubbing against the cervix, a fingernail scratch from self-examination or sex, and will go away on its own. Doctors often cauterize it, because they want to make it heal faster. You can observe your cervix for a few days to make sure it goes away.

The term “squamo-columnar junction” is a descriptive term that denotes the rim where the lining of the cervical canal (made up of column-like cells) meets the face of the cervix which is covered by squamous (flat) cells. This forms a visible red circle around the cervical os. This is like the difference between the skin of our face (squamous cells) and our lips (columnar cells) This circle gradually becomes smaller over time usually.

Also, with the information Women's Health In Women's Hands provides on this site on the Anatomy page where we go into more detail about sexual and reproductive anatomy, you'll know what is normal for your body at any given time during your cycle and be able to identify when you may need to go to your care provider for more in depth help.

It's important to say again: Your normal may be different than the images you see online. Fertile mucus is typically egg white clear, but your mucus may look different. The more you do your exams, the more you look at your mucus through your cycle; the more you'll recognize your normal. It’s also important to distinguish between a “secretion” and a “discharge”. Jokes about how a female’s vagina smell bad make us highly aware of any liquid coming out of our vaginas, and sometimes we confuse a healthy, essential secretion with an unhealthy discharge. In our lack of basic education, we may even douche to get rid of the secretions that keep our vagina moist and clean, which can cause irritation and upset the balance of the vaginal ecology. If we’re trying to become pregnant, the cervical mucus that is secreted during our fertile phase is like a major highway that the sperm ride on; in fact, the structure of that mucus enables the sperm to be “sucked up” into the uterus.

A discharge may be either thick or thin and watery and smelly, because it is composed of sloughed off bacteria, or microscopic animals, such as yeast or Trichomonas. We can often make a very good guess about what kind of infection we have by noting its characteristics.

Self Help groups often learn to do uterine size check to become familiar with the uterus. When learning to do a uterine size check, we’re often surprised to learn how small and firm a non-pregnant uterus is; it’s about the size of an unshelled walnut or plum. If you’ve been pregnant, it’s usually slightly larger and softer.

With a disposable plastic glove on your favored hand with a dab of lubricant on the index finger and middle finger, slowly insert those two fingers into the vagina as far as possible, meanwhile pointing your ring finger and little finger downwards. Then place the flat of the fingers of your other hand on the abdomen just above the pubic bone, pressing gently but firmly downwards. Then move your hands together, imagining that you’re ‘bouncing’ the uterus between your hands. Since the uterus is suspended by ligaments, it will move. Your aim is get an impression of its size, shape and texture.

While doing the uterine size check, you can easily locate the ovary also by gently but firmly pressing downward on abdomen toward the hip bone with your upper hand (if you’re right-handed) until the person being examined says “ouch”. Under ordinary circumstances, you can’t directly feel the ovary. The ovary is sensitive and it will let you know when you’ve touched it.

A normal looking cervix might be pink and smooth or have red blemishes. It may be uneven (not perfectly donut round), it might be rough or splotchy. All of these are normal. You can take a look at How The Cervix Changes and see a examples of normal, healthy cervixes.

You may see mucus covering or coming out of your cervix’s os, which is natural. The changes you’ll notice in your mucus during your menstrual cycle are responding to your hormones and varies from pasty-white which is considered non-fertile to a clear and stringy egg-white texture, which is considered fertile and does not have a strong odor.

Your cervix might have fluid-filled sacs on it that look like blisters. These are called Nabothian cysts and are also normal and do not need treatment. They’re caused by a blockage in the mucus-producing glands of the cervix. In some women they come and go, and others have them for years.

You may see polyps, which grow in benign ways and protrude through the os. They may bleed easily but do not need to be removed unless they bother you. If they change or grow, you may want to have someone look at them.

Cervical bluing may be the first sign that you’re pregnant. 50% of women who are pregnant will have a blue or purplish colored cervix because of increased blood circulation. During pregnancy, the cervix might look puffy and softer and the os might be more open.

Vaginal and cervical secretion is normal but if you notice any of the following during your self exam, it might indicate you have an infection.

If you suspect an infection, it might be time to talk to your care provider, who can take a sample of your cervical cells (a pap smear) and send them to a lab to be tested for abnormalities including cancer. Infections like chlamydia or gonorrhea, can cause serious complications if no treatment is sought. Other conditions can be managed with home remedies.

Your self exam is not a replacement for a pap smear.

Most sexually transmitted diseases can’t be seen during a self exam, except for the herpes virus which presents with visible sores. If you suspect you may have an STD like chlamydia, gonorrhea, HIV/AIDS, or hepatitis, you’ll need to be tested by your care provider and get the appropriate medication.

Yeast is an overgrowth of natural vaginal yeast. It can cause a white, cottage cheese-like discharge and usually causes uncomfortable itching. There are ways to manage a yeast infection, including things like garlic vaginal suppositories, yogurt douches, herbal or natural treatments as well as over-the-counter medications. 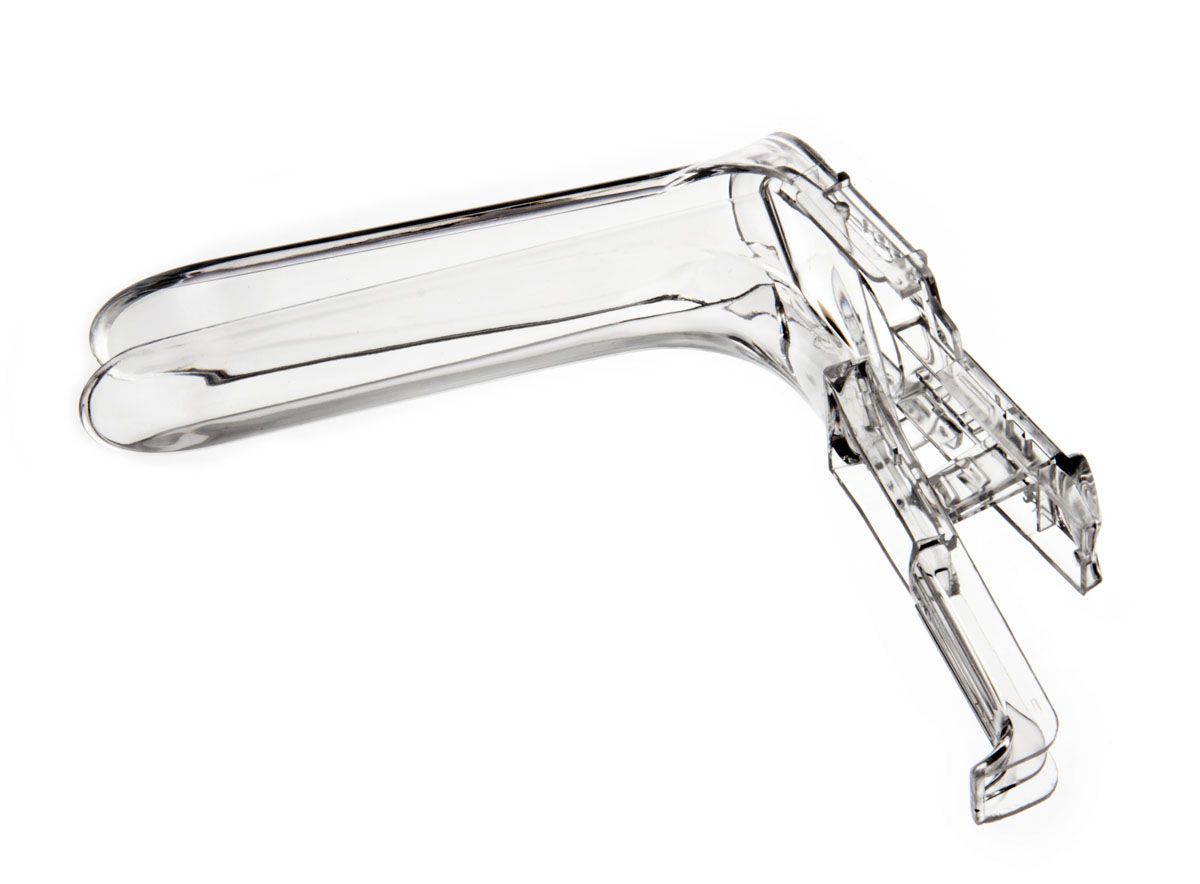 It’s a revolutionary act for a woman to learn to use a speculum, mirror and flashlight to look at her own cervix, and share this knowledge with other women

Women’s Health in Women’s Hands is designed for educating ourselves about our bodies and health, helping each other, so we’re empowered health consumers